The Utility of History: Perspectives on International Development 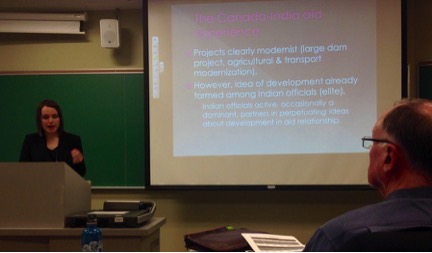 Don’t say history doesn’t have the power to change the future. At Congress 2015, Historians of Humanitarian Aid held a panel on the "utility of history" in today’s development in the Global South. Jill Campbell-Miller of St. Mary’s University (pictured) presented a case study of Canadian bi-lateral assistance to India in the 1950 to illustrate how the history of development practice is important and useful for both scholars and practitioners of international development today.

Campbell-Miller argued that at the very least, history can have an effect on institutional memory, the collective understanding of an institution’s past. That understanding could potentially contribute to better judgements in the present and improved plans for future development. The idea seems simple, but moderator Ian Smillie noted that memory is a huge problem where international development is concerned. Campbell-Miller argued that developers’ access to well-researched and well-written histories could break familiar patterns of the past and even challenge assumptions about development itself.

John F. Devlin from the University of Guelph presented his study on the role of agriculture in the industrialization of Asia. Devlin sought to determine the factors that allowed for the transformation and see how those factors fit with the situation of the Global South. Devlin provided a model for looking at historic successes to solve current development problems.  Stephanie Bangarth of King’s University College also presented a series of case studies to illustrate what can be learned from the history of international development.

In the discussion period to follow, Smillie (pictured) noted that a problem in development is the need for results and success: “If we knew how to end poverty we’d have done it by now. We should be treating each project as an experiment, because that’s what development projects are.” Smillie recognized a chronic “failure to learn from failure,” which the panel hopes to eradicate. Kevin Brushett of Royal Military College agreed that a detailed look at history will help us understand “why we keep returning to particular tropes of aid.” June Francis of Simon Fraser University asked, “What accounts for the disparity between the myth and reality of foreign aide?” Ted Cogan of the University of Guelph suggested that Canada in particular has tried to attach foreign aide to stereotypical Canadian values and in reality there is detachment between the ideals of Canadian identity and what is happening on the ground. Devlin added that Canadian identity is “aspiration, not fact”. Historians and social scientists have the task of finding out what foreign aid actually does. Once the reality of the past and present is known more broadly, international development could progress to make a bigger difference.