Public Outreach and Combatting Populism: The Future of the Academy in the Public Sphere

The Congress of the Humanities and Social Sciences brings together leading thinkers, academics, researchers, policy-makers and innovators to explore some of the world’s most challenging issues. Congress celebrates the vitality and quality of Canadian research contributions, and helps train the next generation of Canadian ideas leadership. This year’s theme “The Next 150, on Indigenous Lands" celebrates the history, legacy and achievements of the peoples and territories that make us who we are, and anticipates the boundless opportunities of the future. Organized by the Federation for the Humanities and Social Sciences, this year’s Congress is being hosted by Ryerson University in Toronto from May 27-June 2. Follow this series of Big Picture at #congressh blogs.

What role does the university play in dealing with the very concrete threats of isolationism, abuse of minorities, and the closing of borders in nations around the world and here in Canada? Professors Homa Hoodfar, Bessma Momani, and Anver Saloojee spoke at length on this subject, as well as on the related issues of academic freedom and public engagement. 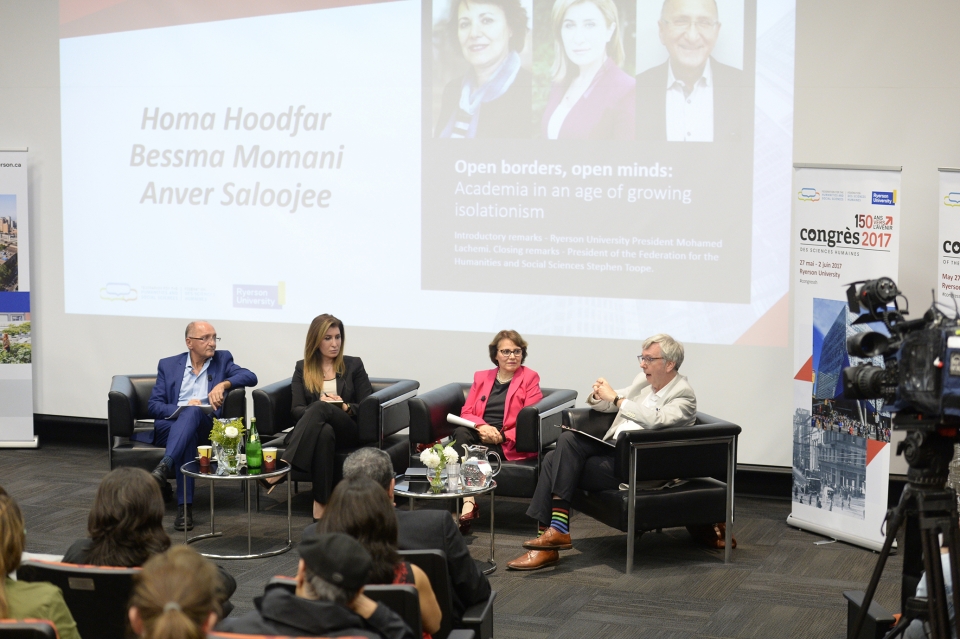 Hoodfar, who was recently imprisoned for four months in Iran for including feminist elements in her publication record, spoke about what academic freedom is and how we can use it to make our universities more relevant in an age of declining democratic institutions. While in prison, Hoodfar wrote on the walls of her cell with her toothbrush because she was denied writing materials. In that writing, she determined that academic freedom is a social capital left to the academy in trust for the betterment of society, and that capital must be reported on in order to be of use, especially in an age when academic discussion is seen as less and less relevant in the public sphere.

Saloojee spoke of the academy’s role in dispelling myths: the myth of Islamophobia, which is better understood and named as systemic and individual discrimination based on race, religion, class and gender; the myth of the woman in the hijab, bereft of agency or choice; and the myth of the brown Muslim fundamentalist terrorist, when terror comes from many varied sources, including the state itself. It is the role of the academy to uncover the root causes of alienation that result in individuals committing acts of terror as well as the roots of state terror.

According to Momani, universities will become irrelevant if they don’t change to address the rise of populism and increasing attacks on people and institutions that populism brands as “elite.” If academics can’t engage with and make themselves valuable in the eyes of the public at large, they will continue a slip toward irrelevance that is already taking place in the halls of power. While working in Washington, D.C. recently, Momani discovered that the term “academic” as used there is definitely not a compliment. Academics often see themselves as progressive, but the academy is today being cast as the establishment. Expertise is under attack, and the institutional barriers in place within the academy—an expectation to publish for other academics only, a culture that disincentivises public engagement—needs to fundamentally change to keep universities relevant and ensure that they continue to receive public support and funding into the future, as well as making sure the gap in the public conversation isn’t filled by pundits.

When asked by a graduate student in the audience who should be leading the way in changing the university system and bringing public engagement to the forefront, all of the panelists agreed: it is the job of established academics to change the system, the people on hiring and funding committees who enjoy the relative stability of tenure, to lead the way forward, not students or early career academics who might risk everything in the attempt to push through reform.

Open Borders, Open Minds: Academia in an Age of Growing Isolationism, with panelists Homa Hoodfar (Professor of Anthropology, Concordia University), Bessma Momani (Senior Fellow, Centre for International Governance, University of Waterloo), and Anver Saloojee (Assistant Vice-President, International, Ryerson University), was hosted by the Federation for the Humanities and Social Sciences and Ryerson University as part of the “Ryerson presents…” series at Congress 2017. Watch the video.