Canada’s opposition critical to its stability 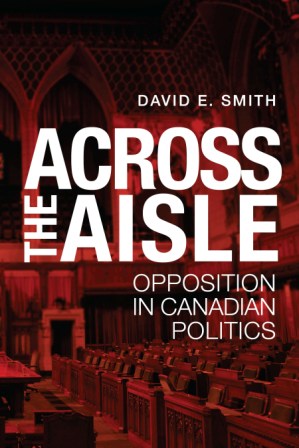 Canada’s parliamentary system is in good shape, and its opposition is generally healthy, says a professor who has just completed a major study of opposition in Canada.

But David E. Smith, author of Across the Aisle: Opposition in Canadian Politics, warns that our political system, like a good relationship, needs constant nurturing to remain in top shape.

Smith, whose book won the 2014 Canada Prize in the Social Sciences awarded by the Federation for the Humanities and Social Sciences, is the author of a number of studies on Canada’s political system.

During the course of his research for the other books, he discovered that there was very little written about opposition – a concept that is central to our parliamentary system. He decided to fill the gap, and Across the Aisle is the result.

Smith says that the concept of opposition in Canada is not as strong as it used to be.

“It doesn’t seem to have much purchase in the public mind,” he says, adding that he was surprised to find how imprecise the world of opposition is in Parliament, particularly since the opposition is shared between several political parties and also because different parties – the Bloc Québécois, Reform and more recently the New Democratic Party – have served as the official opposition in the last two decades.

He blames this change of focus on many things, including the pace of contemporary life, in which so many things compete for our attention.

“There was a time when Parliament was at the apex, but people don’t look at political parties the same way as they used to,” he says.

He says the media, for example, don’t pay enough attention to the opposition’s work, and when they do, they tend to focus on personalities and not issues: “The opposition really exists in a shadow world as far as the public is concerned, and so much of it is about personalities that it seems to me quite shallow.”

He also says our political system is suffering because we increasingly try to deal with issues through what he calls legalism – for example regulating ethical issues by creating a code of ethics – instead of through political debate.

Yet opposition is critical to our system of parliamentary government, says Smith, since it provides a forum for criticizing government actions.

And he says in that respect the system does work.

For example, he says one of the big successes of our system was how it handled the separatist Bloc Québécois becoming the official opposition following the 1993 federal election.

“Canadian politics has been very accommodating,” he says. “When the Bloc became the official opposition, the sky didn’t fall. We worked it out, and Canadians should be quite proud of that.

“That’s why I think parliamentary government is very important. It does lower the intensity of feelings partly because there is a structure for debate.”

“I think it’s very important to keep the temperature as cool as possible in politics,” he says.

David E. Smith is Distinguished Visiting Professor in Ryerson University’s Department of Politics and Public Administration. His book Across the Aisle: Opposition in Canadian Politics is published by University of Toronto Press.