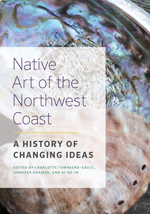 Native Art of the Northwest Coast: A History of Changing Ideas is, at over 1,000 pages, a very thick book.

Charlotte Townsend-Gault, one of the book’s three editors, says she doesn’t expect people to sit down and read it cover to cover. But in some ways, she adds, that’s kind of the point.

Townsend-Gault says she wanted to get away from the idea that native art – and the relations between the Indigenous and non-Indigenous peoples of Canada – is a simple and straightforward concept. It is only by embracing its complexity and its contradictions that we can come to understand it. And sometimes, that’s best done bit by bit, chapter by chapter, idea by idea.

Native Art of the Northwest Coast: A History of Changing Ideas has won the 2015 Canada Prize in the Humanities awarded by the Federation for the Humanities and Social Sciences. The book is a collection of essays by a range of authors, each of whom examines the concept of art from his or her unique perspective.

For example, one of the authors, Daisy Sewid-Smith, of the Kwakwakewakw nation, states early on that “the word art is not in the vocabulary of my nation.”

She explains that Kwakwakewakw carvings and representations are not art objects or paintings, but living symbols that teach and reveal knowledge of the past.

In fact, says Sewid-Smith, in the eyes of some Indigenous people, non-Indigenous art seems ‘mute’ in the sense that it does not tell a story. In non-Indigenous art, the work itself is what’s important, not the subject. “Otherwise we would not be asking these questions: Who is Mona Lisa? Why is she smiling? What is her secret?”

Townsend-Gault says Sewid-Smith presents a view that can be countered. And in fact, many of the points of view expressed by authors in the book are contradicted by other authors.

Townsend-Gault is OK with that.

History, identity and art are complex concepts, she says, and don’t lend themselves to simple definitions. What’s art to one person is a cultural symbol to another.

“People are awakening to this now,” she says. “Twenty-five years ago when I had the idea for this book, things were seen in much simpler terms.

“We know how much prejudice there is, and prejudice comes from misunderstanding, or wilful misunderstanding. People don’t know enough. So putting into one book some appreciation for the diversity of ideas and peoples is what we wanted to do.”

Townsend-Gault adds that there isn’t just one version of history. How stories are told depends on perspective; some stories become dominant, but that doesn’t mean they have more value.

“The book is an attempt to show there are many different versions,” she says.

The best way to get diversity, she adds, was to have multiple authors tackle the subject.

“Each of them was asked to go to archives and other sources and tell us what they found. It’s their report back to the country.

“This book isn’t about guilt and political correctness. The best thing term I can come up with is ‘complicating.’ We have to do what we can to re-complicate history. This book is doing something to fill the gaps of ignorance that are out there.”