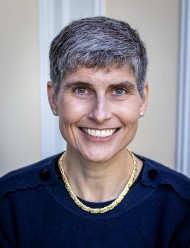 Professor in the Department of English

Jennifer Andrews is a professor in the Department of English at the University of New Brunswick and the outgoing President of the Association of Canadian College and University Teachers of English (ACCUTE).

Jennifer has served as Department Chair (2013-2016) and in every leadership role within her department; co-edited Studies in Canadian Literature for a decade (2002-2012); has been an elected member representing faculty on the UNB Board of Governors from 2016 to the present; served on the ASPP Academic Council (2014-2018); elected to the Modern Languages Association Delegate Assembly in various capacities (2017-); elected co-chair of a completed university-wide planning process leading a 20-member committee from the Fredericton campus (2016); selected to represent faculty concerns on the search committee for UNB’s next President (2018-2019); served on various SSHRC committees over the past two decades.

Jennifer is the author of two books: Border Crossings: Thomas King’s Cultural Inversions, co-authored with Priscilla Walton (UTP, 2003) and In the Belly of a Laughing God: Humour and Irony in Native Women’s Poetry (UTP, 2011), and over thirty articles and book chapters exploring English-Canadian and American literatures and cultures and Indigenous literatures and cultures.