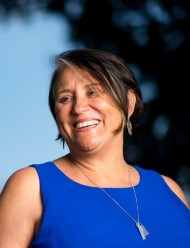 Deanna Reder (Cree-Metis) is an Associate Professor in the Departments of First Nations Studies and English at Simon Fraser University. She is Principal Investigator, in partnership with co-applicants Dr. Margery Fee and Cherokee scholar Dr. Daniel Heath Justice of the University of British Columbia, on a five-year Social Sciences and Humanities Research Council (SSHRC) funded project for 2015-2020 called "The People and the Text: Indigenous Writing in Northern North America up to 1992." This project collects and studies one of the most neglected archives in English Canada. Currently she and her team are working on a database of Indigenous writing up until 1992. See www.thepeopleandthetext.ca.

She has been working with Algonquin scholar Michelle Coupal, Métis poet Joanne Arnott, and KtunaxaSecwepemc activist Emalene Manuel to bring to publication Honouring the Strength of Indian Women: Plays, Stories, Poetry by Vera Manuel. This collection, published through the University of Manitoba Press, will be launched in June 2019 in Vancouver. She is also working on a monograph on autobiography as Indigenous intellectual tradition.

Reder has also worked with Alix Shield to find the excised sections of Maria Campbell’s Halfbreed (1973). This work was first published, with great support by Canadian Literature editor, Laura Moss, here (see also alixshield.com). It has recently been announced that McClelland and Stewart will be reissuing the classic and including the lost passage in late 2019; they also plan to release an audio book to be narrated by the author herself.

Much of Reder’s work to date has been focused on building the field of Indigenous literary studies in Canada: she has co-edited an anthology of literary criticism with Dr. Linda Morra (Bishops University) called Learn, Teach, Challenge: Approaching Indigenous Literatures (2016), suitable for upper undergraduate or graduate study; she has also co-edited an anthology of short stories suitable for the first year university classroom with lead editor Dr. Sophie McCall (SFU), Dr. David Gaertner (UBC), and Gabrielle Hill entitled Read, Listen, Tell: Indigenous Stories from Turtle Island (2017). She is a founding member of the Indigenous Literary Studies Association (ILSA) and served on its executive for three years (2015-2018). Currently she is co-chair of the Indigenous Voices Awards (see Indigenousvoicesawards.org) with Sam McKegney (Queens). She also serves as Series Editor for the Indigenous Studies Series at Wilfrid Laurier University Press.

Currently Reder is the Chair of First Nations Studies and the past Director of the Master of Arts for Teachers of English (MATE) program. In Fall 2018 she was inducted into the College of New Scholars, in the Royal Society of Canada.