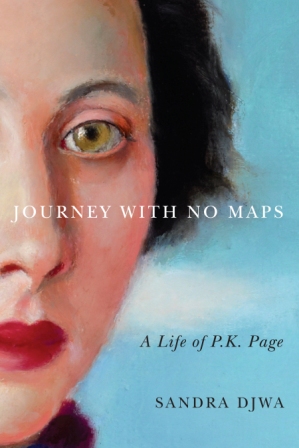 Sandra Djwa, author of a new biography of P.K. Page, says the Canadian poet is a role model for any young woman contemplating a career in literature.

Years before it was fashionable or even common, Page created for herself a brilliant career in which she was recognized internationally as one of Canada’s outstanding  poets and visual artists.

Ms. Djwa is the author of Journey with No Maps, the first full biography of Page, who was born in 1916 and died in 2010. The book has won the 2014 Canada Prize in the Humanities awarded by the Federation for the Humanities and Social Sciences.

Ms. Djwa, now professor emerita of English at Simon Fraser University, met P.K. Page in 1970 and kept in touch with her for the rest of her life.

Ms. Djwa’s biography paints the picture of a modern woman’s life in the culture of her day that was interesting, rich and fulfilling.

“She certainly had the most interesting life of any Canadian woman I know of in the 20th century,” says Ms. Djwa, adding that she was a poet, visual artist, wife, stepmother, friend and mentor.

“And she somehow managed to do all that in a period when a woman was simply expected to marry. She combined what a modern woman would want, which was success in her art, with the traditional sense of a woman as a homemaker.”

It was a life that was lived on Page’s own terms: As Ms. Djwa points out, and as she suggests in the title, her life was a discovery, a journey with no maps.

“There was the older way of looking at it, which was marriage and children, and the other way, which was to become a career woman. Very few people managed to cross that divide. She was 15 or 20 years ahead of American women poets who recognized they could do both.”

P.K. Page (the P.K. stands for Patricia Kathleen) grew up on the Prairies as the daughter of an army officer and developed an early ambition to be a writer. A trip to England when she was 17 widened her world and when she came back home she determined to make writing her calling.

She became part of the Montreal literary world in the early 1940s where she met and fell in love with prominent Canadian lawyer and poet F.R. Scott.

In 1950, after the affair had ended, she married Arthur Irwin, a widower who was chairman of the National Film Board. When he joined the diplomatic corps she followed him on postings abroad.

It was when they were in Brazil that she turned to visual arts. Not hearing English spoken by the people around her, says Ms. Djwa, impeded her ability to create poetry in English so she began to draw the world around her.

She returned to poetry later, and Ms. Djwa says that in her final years she used her talent to write in favour of environmentalism in poems like “Planet Earth” and “Address at Simon Fraser.”

“She was ahead of her time in every way,” says Ms. Djwa.

Sandra Djwa is professor emerita of English at Simon Fraser University and author of Journey with No Maps: A Life of P.K. Page, published by McGill-Queen’s University Press.