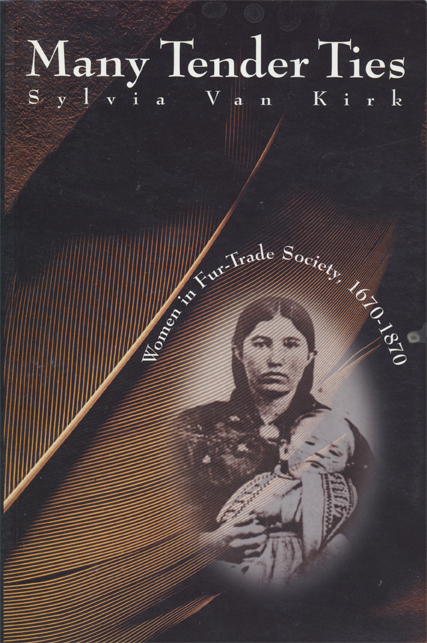 The Awards to Scholarly Publications Program (ASPP) was founded in 1941. As part of the celebrations of the ASPP’s 75th anniversary in 2016, members of the ASPP’s Academic Council will be contributing to the Bookmark it! blog series with reflections on important books that have received ASPP funding, exploring what those books have meant to their discipline, or to them personally as researchers, teachers or students.

I first encountered Sylvia Van Kirk’s Many Tender Ties: Women in Fur-Trade Society, 1670-1870 (Watson & Dwyer) the year of its first publication in 1980, the same year that I began a PhD at Queen’s. I had added it to my comprehensive reading list in colonial North America—one of the few Canadian examples of ethnohistory and studies in Native-Newcomer relations. I was woefully unversed in Canadian history (my undergraduate work had concentrated on European and Imperial history), and although my MA had included courses in Canadian as well as North American colonial history, I had still not really encountered the history of the fur trade or the West. Many Tender Ties was my introduction to both. But it was so much more than that. Many Tender Ties captured my imagination. It not only offered insights into the Native-Newcomer relationships of the North West but it also recreated a world in which women and families were central to the story. I certainly did not then appreciate that Van Kirk’s study was part of a new wave of fur trade history. What I was conscious of, however, was that this was women’s history, written at time when it was still rare to hear the voices of those who were usually silent and indeed, invisible. Many Tender Ties was for me an object lesson on how to “read against the grain” and to capture the lives of women and the central role that they played in negotiating, creating and through their children and grandchildren, recreating enduring societies in the West.

There was another reason why Many Tender Ties resonated so strongly with me in 1980. I had been teaching high school in Northwestern Ontario in the late 1970s. Then, Red Lake was a prosperous gold mining community but it had been the site of a small fur trade post a century earlier. The Hudson’s Bay store was still an iconic landmark and one of the few retail stores in the community; and my landlord divided his time between trapping and prospecting for gold. But Red Lake was also a community in which the legacy of the arrival of white women to Red River was visibly evident. The Aboriginal residents of the region were almost completely disenfranchised, economically and socially marginalized by what was a prosperous white settlement.

Red Lake has certainly changed in the last 35 years, and so too has our understanding of the multicultural and multi-racial societies of the West and indeed the nation. But Van Kirk’s study remains the authoritative work on the central role played by Aboriginal women in what was the major economic driver of the North West. Certainly, when my students read it today, they often question the rather romantic depiction of the relationships between Aboriginal and Métis women and their French or English partners; and they point to barriers that Métis women and men encountered as they were forced to negotiate the forces of imperialism. (Van Kirk later explored this negotiation quite evocatively in “‘What if Mama is an Indian?’: The Cultural Ambivalence of the Alexander Ross Family,” her contribution to the volume The New Peoples: Being and Becoming Métis in North America, edited by Jacqueline Peterson and Jennifer S.H. Brown.)

Some suggest that Many Tender Ties is “under theorized” and I do not doubt that if Sylvia Van Kirk was considering this subject today, she would have explicitly placed her study within a context of the new imperial and transnational history. Many Tender Ties is a product of its time. It is what is now considered quite “traditional” women’s history. But what makes it remarkable is that it is not only an object lesson on how to uncover the experiences of individuals who left no written records of their own, it continues to be a fine example of the dynamic and changing impact of colonialism on both Native peoples and Newcomers as well as their children and grandchildren. And as all first class histories do, Many Tender Ties has spawned now two or three generations of scholars to question and consider how individuals, families and communities negotiate the most fundamental questions of race, gender and class.

Jane Errington, Professor of History at Queen’s University and Professor Emerita at the Royal Military College of Canada, has been teaching and writing about the history of colonial North America for 30 years. Her work includes The Lion, the Eagle, and Upper Canada, Wives and Mothers, School Mistresses and Scullery Maids, and Emigrant Worlds and Transatlantic Communities, all of which received support from ASPP. She is now a member of the ASPP’s Academic Council.