Early 20th-century Montreal through the eyes of a Jewish immigrant 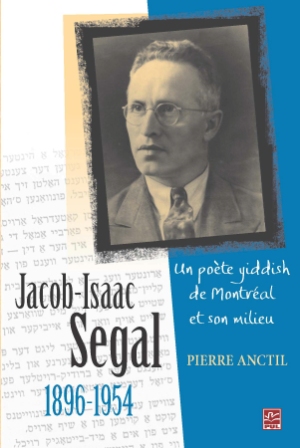 For the first half of the 20th century, Yiddish was Montreal’s third language, after French and English.

A new book by University of Ottawa professor Pierre Anctil explores the work of Jacob Isaac Segal, a Montreal poet from that era who wrote only in Yiddish.

Anctil, who has just been awarded the 2014 Canada Prize in the Humanities by the Federation for the Humanities and Social Sciences for his work, says Segal’s poetry offers something quite unique: an immigrant’s view of early 20th-century Montreal.

Born in Ukraine in 1896, Segal, whose native language was Yiddish, arrived in Montreal in 1910. He spent the rest of his life there. He quickly found work in the garment industry, where it was possible at the time to work without having to know any language other than Yiddish, and turned to writing poetry in his spare time.

Anctil says that one of the most striking things about Segal is that unlike other immigrant authors, whose work was mainly inspired by homesickness, Segal turned to the city he was living in for inspiration.

Even in French-Canadian literature of the era Montreal was described as a place of oppression. Segal offers a different perspective. His Montreal is full of bell towers, parks and neighbourhoods, and like his anglophone and francophone fellow citizens, he takes on winter as a theme.

For an immigrant, says Anctil, this is a significant cultural shift.

Canadians, adds Anctil, need to discover the literatures written in Canada in languages other than English and French. They are, he says, part of our heritage.

“We need to understand that other people have written – people who were neither francophone nor anglophone – and they have left behind something important,” he says. “And not only in Yiddish, but in German and Ukrainian and Polish, for example. We have to open our minds to the fact that yes, there were immigrant authors who wrote in non-official languages.

“Mordechai Richler, who wrote in English, is now part of Quebec’s literary history. I wanted to show that before Richler, there were other authors, people who wrote in Yiddish.

“We no longer live in a world of only English and French; we have to take a broader view.”

The growth of the Jewish community in Montreal, he said, marked a paradigm shift in the city and the start of modern multiculturalism.

“My book shows that diversity works, and that because of it modern Quebec society is enriched,” he says.

Pierre Anctil, a Fellow of the Royal Society of Canada, is a full professor with the Department of History at the University of Ottawa. Jacob-Isaac Segal, 1896-1954 : Un poète yiddish de Montréal et son milieu, is published by Les presses de l’Université Laval.