Reflections on the Congress 2018 Big Thinking lecture entitled Thinking about war with Margaret MacMillan, C.C. organized by the Federation for the Humanities and Social Sciences and the University of Regina. 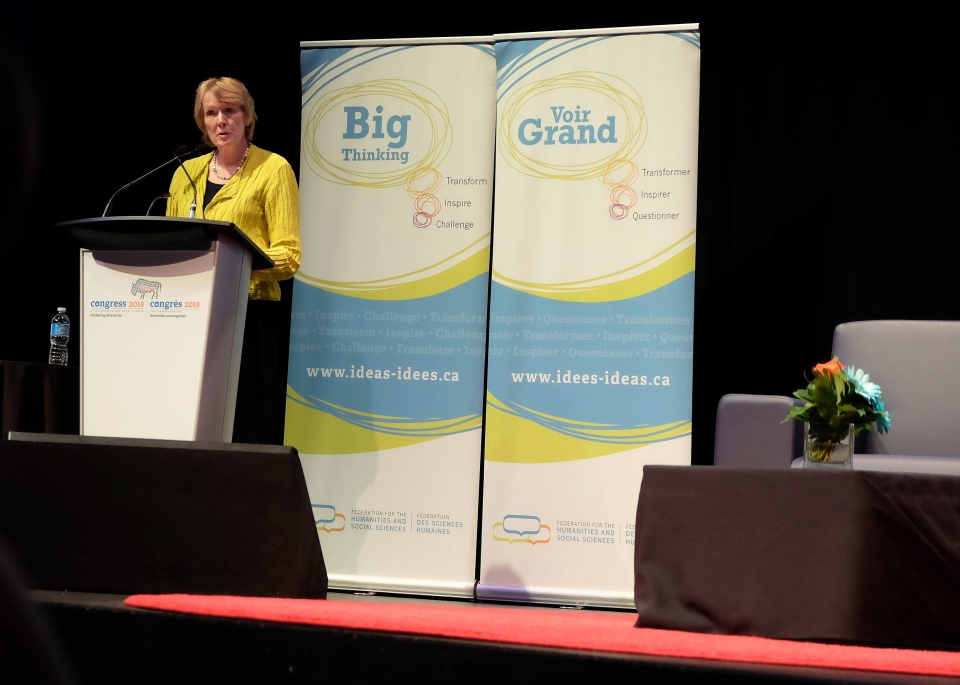 In a country like ours, it can be easy to forget about the prevalence of war in modern society. Nonetheless, some of us walk by war memorials every day, while others may see military regalia at hockey games, for example. Famous movies, books, and video games depict war as an exciting, honourable endeavor. Margaret MacMillan examines the intersection of war and society, and shows how war is woven into so many areas of a peaceful life.

It is important to consider what has enabled humanity to wage war. As modern society moved from hunter-gatherers to agricultural society, humans reduced their ability to move between locations. Individuals settled in specific areas, developing their resources, and establishing nations. With the ownership of land came the desire to protect it from those who want to steal or overtake one’s property. Nationalism plays a role in why war is waged, with government leaders rousing fear and suspicion of neighboring regions. Emotional responses such as fear and pride can manifest in the need to assert dominance through large-scale conflict.

But while war can be waged for evil intentions, progress for an overall society may result from the conflict. Consider the effect of World War II on the perception of women in western countries. Prior to the conflict, women were largely relegated to housework and deemed unsuitable for working roles in society. After able-bodied men were sent to the frontline, women began taking up the roles traditionally held by men. The myth of women being ‘better equipped to stay in the household’ was quickly set aside, leaving women, in the post-war context, with a higher social standing than that which they had prior to it.

While war has resulted in overwhelming suffering, it also ushered in the development of many of our most important institutions. The British Navy required efficient management systems, which triggered the development of bureaucracy and government control in the overall country. From medical advancement to education, institutions that serve us today were, at one time, developed for the purpose of serving those on the front lines. War is ultimately cruel, but an important part of human history. With war shaping how we live and how we interact today, the understanding of war is important in determining the future of society as we move towards an unstable world.