Indigenous knowledge, symbolic literacy and the 1764 Treaty at Niagara

This blog post is part of the Federation Equity Issues Portfolio’s ‘Transforming the Academy: Indigenous Education’ series, which will be the focus of the Portfolio’s programming at Congress 2011.

It was in the year 1764 when the Treaty at Niagara took place.  This event served to ratify the 1763 Royal Proclamation, commonly thought of as Canada’s first constitutional document. In actuality, the 1763 Royal Proclamation is only one of Canada’s first constitutional documents.  Because successive  governments of Canada have promoted a particular version of history – a fiction of two founding nations – the broader Canadian public may be unaware of the significant roles Indigenous Nations held in Canada’s creation.  Perhaps this storytelling and my narrative approach, both of which are valid and legitimate ways of knowing, will serve well to convey an Indigenous understanding of Canada’s history. 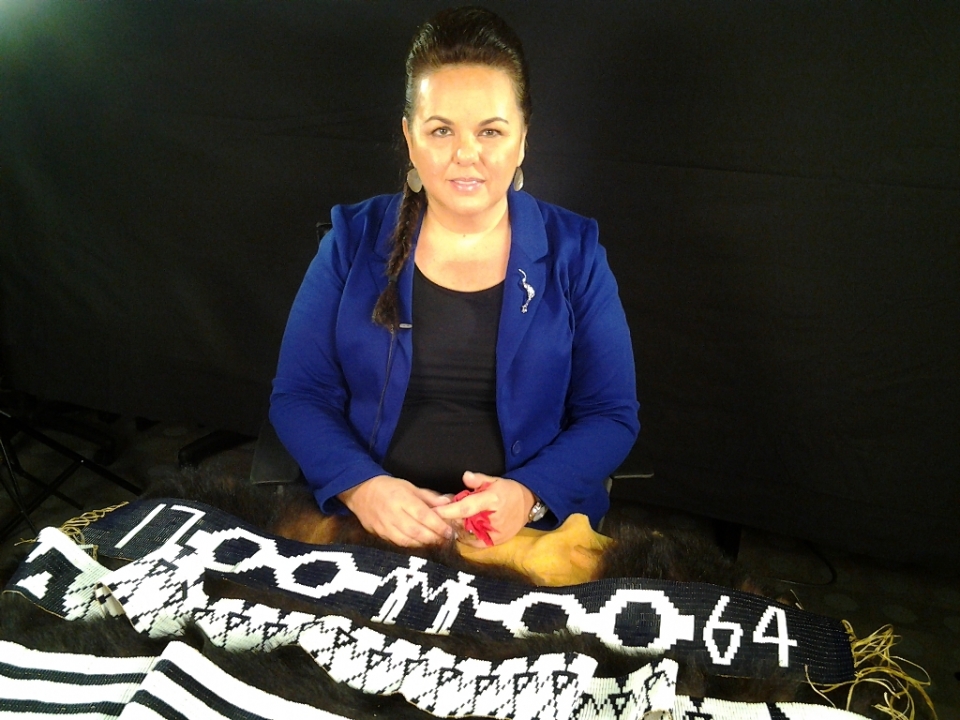 New editions versus reproductions of the Wampum Belts exchanged during the 1764 Treaty at Niagara. Photo credit: Nikolaus Gehl. © Lynn Gehl

Indian Superintendent William Johnson called the congress of 1764 as a means to congeal the interests of several different groups of the newly emerging society: British, Anishinaabe (Algonquin, Mississauga, Nipissing, Odawa, Ojibway…), Cree, Huron, and Haudenosaunee.  Johnson was concerned about Anishinaabe Chief Pontiac whose freedom fighting actions resulted in the death of many European settlers and the destruction of a number of British forts.  In addition, Johnson had to safely secure the land holdings of the French people who had settled in Lower Canada, part of which is Algonquin Anishinaabe traditional territory.

The Algonquin and Nipissing Anishinaabe Nations were commissioned by Johnson as runners for the 1764 congress.  As constitutional delegates the Algonquin and Nipissing Nations travelled the land and waterscapes with a printed copy of the Royal Proclamation as well as with several strings of white wampum to signify peace and invite all of the surrounding Nations to attend.  Due to the success of these constitutional delegates well over 2,000 Chiefs from the Great Lakes region attended.

To guarantee the successful ratification of the Royal Proclamation, to ensure a clear understanding as well as to codify the historic event at Niagara, Johnson relied on Indigenous practices of wampum diplomacy and its inherent forms of symbolic literacy. During the ratification process Johnson presented two Wampum Belts to the Anishinaabe.  These two Belts are known as The British and Great Lakes Covenant Chain Confederacy Wampum Belt and The Twenty Four Nations Wampum Belt. The former Belt codified a relationship between equal allies that was as strong as links in a chain, a relationship that required a process of polishing and re-polishing what may tarnish, just as silver tarnishes. The latter Belt represented the Indigenous Nations that participated at the Treaty at Niagara, where the chain secured around the rock, running through the twenty four Nations’ hands, and attached to a British vessel, and represented the negotiating process Indigenous Nations were to take to ensure their equal share of the resources and bounty of the land.  In turn, Indigenous Nations also gave Johnson a Wampum Belt: the Two Row Wampum Belt. This Belt codified a nation-to-nation relationship rooted in the philosophy and practice of non-interference mediated by peace, friendship, and respect.

In sum, through offering The British and Great Lakes Covenant Chain Confederacy Wampum Belt and The Twenty Four Nations Wampum Belt to the Indigenous Nations and through accepting the Two Row Wampum Belt, the British accepted a nation-to-nation relationship rooted in a policy of non-interference. This nation-to-nation relationship applied to matters such as Indigenous Nations’ right to self-government, their right to define their own citizenship laws, as well as their right to an equal distribution of land and resources required to self-govern.  Clearly these three Wampum Belts embody Indigenous agency as sovereign Nations versus subjects of the British.

Although many Canadians are unaware, in conjunction with the 1763 Royal Proclamation these three Wampum Belts and the knowledge they codify are also Canada’s first constitutional documents and thus an important element of Canada’s history that must be respected and honoured in practice.  Certainly in Indigenous Nations’ continued quest for self-determination the knowledge of this nation-to-nation relationship lives on in our hearts, minds, and practices.  In the contemporary context the knowledge codified in these three constitutional documents translates to the need for the governments of Canada to respect and commit to a nation-to-nation relationship and provide Indigenous Nations with their rightful share of the necessary land and resources that allows for our financial, jurisdictional, and administrative independence for as long as the sun shines and the rivers flow. This constitutional relationship ratified at Niagara, as Kiera L. Ladner has argued, is known as Treaty Federalism.

To create a larger space for an Indigenous hegemony, one where our right to self-determination and mino-bimadiziwin resides at the core, I have constructed new editions of these three historic Wampum Belts or alternatively these three constitutional documents. It is important that these three Wampum Belts be valued as “new editions” versus merely as “reproductions” as indeed the original meaning of a nation-to-nation non-interfering relationship remains intact in the minds and hearts of Indigenous people. I completed this task through the time-honoured and ancient traditions of Anishinaabe ways of knowing and being such as Elders, tobacco, storytelling, and learning by doing. Elder, language speaker, and ceremonialist Doug Williams offered tobacco asking me to learn the knowledge of these three Wampum Belts. I also received Wampum Belt instructions from Elder, language speaker, and ceremonialist Grandfather William Commanda.

Prior to beginning my process of weaving these three Wampum Belts I also learned from the knowledge and wisdom of others such as Annie Cooper, Paul Williams, Anishinaabe historian Alan Corbiere, and Anishinaabe legal scholar John Borrows.  In addition, in weaving these three Wampum Belts I relied upon descriptions and sketches found in the historic literature.  Along my journey I made tobacco offerings, paid particular attention to my dreams, and smudged all the necessary elements required. To wrap and protect my Wampum Belts my brother, Dennis, was kind and gifted me with both a bear pelt and a moose hide harvested from traditional Algonquin Anishinaabe territory.  When I completed the entire task I feasted my new knowledge bundle to honour its spirit.  In re-building this Treaty at Niagara Wampum Bundle I have articulated the knowledge our ancestors carefully embodied in the hearts and minds of the Indigenous peoples. The year 2014 marks the 250th anniversary of the 1764 Treaty at Niagara, the event that ratified Canada’s constitutional beginnings.

Lynn Gehl, Gii-Zhigaate-Mnidoo-Kwe, is Algonquin Anishinaabe-kwe from the Ottawa River Valley and a course director at York University in Toronto. Email: lynngehl at gmail.com