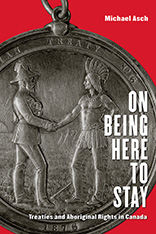 Michael Asch says the real defining moment in Canadian history was not Confederation, but the day the first treaty was signed between European settlers and the country’s Indigenous peoples.

And he is inviting Canadians to rethink the way we look at the country’s past by paying more attention to the treaties that are at the base of the coexistence between this country’s Indigenous and non-Indigenous peoples.

Asch, an anthropologist, has won the 2015 Canada Prize in the Social Sciences for his book On Being Here to Stay: Treaties and Aboriginal Rights in Canada. The prize is awarded by the Federation for the Humanities and Social Sciences.

The book examines the basis on which Indigenous and non-Indigenous people coexist in Canada, on the premise that we are all ‘here to stay.’

Asch says European settlers arriving in what is now Canada could have looked at the land from one of two very different perspectives. Either they could have seen it as an empty place, a blank canvas on which to build a new world, or as a land already occupied by people – in which case they needed to figure out a reasonable way for everyone to live together.

“We’ve told the story of Canada is if it were an empty land,” he says, adding that Canadian history pays more attention to our relations with Britain and France than it does to our relationship with this country’s first peoples.

“I’m calling for us to reimagine the history of this country,” he says. “We’re here to stay. We have to figure out an honourable way to do it. Because if we don’t have the permission (of the Indigenous people), then we ought to be thinking that we are not here legitimately.”

Asch, whose interest and involvement in the relationship between Indigenous and non-Indigenous Canadians spans several decades, says Canada’s native peoples take the treaties seriously. But he says the rest of the country does not, adding that for the most part the treaties have not been respected.

“That’s a serious issue,” he says.

Asch takes an optimistic approach and says there are two things we can do to correct the situation.

In the short term, “we can start implementing the treaties in the spirit in which they were made,” he says. After all, he notes, they are the legal basis for the presence of non-Indigenous peoples in this country.

“If we don’t have their permission, then we are not here legitimately,” he says. “For the most part the First Nations have understood that and have been willing to make treaties with us.”

The second thing Canadians can do is to refocus our history books and the way history is taught.

“We haven’t spent a lot of time seriously considering what it means to be here to stay,” he says. “We can start changing the way in which we look at our history so that we understand the importance of the treaties in legitimizing our presence here. Without legitimate access to the land, we can’t build a country.”

The treaties, he says, should be Canada’s Magna Carta, the basis of our law.

In fact, Asch invites Canadians to read the treaties for themselves.

“Go beyond the text and find out everything you can about them,” he urges, “including what the Aboriginal peoples say they like about them.”