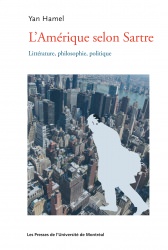 Jean-Paul Sartre, an influential French writer, philosopher and politically active intellectual in the mid-20th century, was fascinated by the United States.

A new book by Yan Hamel, a professor of literature at TÉLUQ, Quebec’s distance-learning university, analyzes that fascination and the effect it had on French opinion and political discourse, particularly on the left.

“Sartre set the agenda for discourse about the U.S. among left-wing French intellectuals after the Second World War,” says Hamel, adding that this was one of the reasons he decided to research the topic.

Hamel takes care to point out that L’Amérique selon Sartre is not a biography, nor does it explore Sartre’s life as a person. It is, rather, a study of how he viewed the United States as reflected in his books, essays and various articles.

As he reread all of Sartre’s oeuvre – some 15,000 pages of work that includes literature, philosophy and articles – Hamel discovered that the U.S. was a recurring theme. He was able to break that theme down into three distinct phases.

Sartre, who lived from 1905 to 1980, first visited the U.S. in 1945, shortly after the end of the Second World War. But he had for a long time been fascinated by the country – its jazz, its films, its individualistic and independent cowboys, and the skyscrapers of New York that were to him a symbol of wealth and modernity. The country’s ‘savagery’ – for example the Chicago gangster violence – also stood out.

Seen from afar, this larger-than-life country attracted him; it seemed to be the country of the future. It was, in Hamel’s view, the ‘longed-for America’. Sartre’s longing was so strong, he dreamed of the U.S. at night and borrowed techniques from American writers when writing his novels.

But when he visited the U.S., Sartre was able to observe a more nuanced reality – a reality that included difficult working conditions in factories, poverty, and serious racial tension. This ‘America uncovered’ was what he wrote about, for example in two articles detailing ‘the Black problem’ that appeared in the French newspaper Le Figaro during the summer of 1945 after his first visit.

Sartre became disenchanted with the U.S. as the Cold War gathered steam.

“He found it increasingly difficult to speak of the U.S.in a positive light,” says Hamel.

By 1953, what Hamel calls Sartre’s ‘despicable America’ was born and from then on he would rail against the U.S., from its Communist witch-hunts to the Vietnam War. The country had, in Sartre’s eyes, become a monster.

Hamel says Sartre’s writing is important because he was able to present his views of the U.S. to the French public, and do so from a French point of view. When he wrote of the U.S., it was to address the fantasies, desires and fears shared by his compatriots.

Not all of Sartre’s ideas are original, says Hamel; his strength lies in his ability to present existing thoughts, ideas or concepts in a new way and make them interesting. In that way he helped shaped public debate in France.

“That’s why Sartre is interesting,” says Hamel. “He takes ideas and presents them in a new light. They may just be popular beliefs, but he puts them back into circulation.”

Yan Hamel is a professor of literature at TÉLUQ, Quebec’s distance-learning university. He has also been president of the North American Sartre Society. L’Amérique selon Sartre : littérature, philosophie, politique is published by the Presses de l’Université de Montréal.